Day Two saw the best of British battle it out for a place in both the semis and finals of the 2016 British Junior Championships in Manchester today.

The GU19 went according to seed with [1] Lucy Turmel (Suffolk) booking her place in the final despite a spirited challenge from second seed Grace Gear (Hertfordshire). Joining Lucy is BJC 2013 Under 15 runner-up, and 3/4 seed Jasmine Hutton (Sussex) who convincingly dispatched Charlotte Jagger (Yorkshire) in the semi in 24 minutes.

Meanwhile, the BU19 quarter finals witnessed two epic battles. Curtis Malik (Sussex) mounted a tremendous comeback after being two nil down to overcome [3/4] seed Adam Corcoran (Lincolnshire) in an 82 minute marathon. Meanwhile, [5/8] Tom Walsh dispatched Harry Falconer in a topsy turvy 74 minute thriller that could have gone either way. The battle proved too much for Tom, however, who was later dispatched by [9/16] Stuart MacGregor (Yorkshire) in the semi. Joining Stuart in the final is top seed and three-time British Junior Champ Kyle Finch who convincingly downed Curtis Malik 3-0 in the semi.

In the BU17, Nick Wall justified his top seeding in the semi by defeating [5/8] Josh Owen (Warwickshire) 3-0. Joining Nick is Hampshire’s Jared Carter who saw off stiff competition in the semis from Lancashire’s Oscar Beach in a 64 minute 3-2 thriller.

Top seed Katie Malliff (Bucks) beat Orla Young (Scot) 3-0 to reach the semi-finals of the girls under 15 category. However, Orla saved two game balls in the second game before Malliff came out on top. Lydia Robinson came from behind to beat Lucinda Cross 3-1 in four closely contested games. Layna Beattie wasn’t troubled by Darcie Mounter winning in three straight games, 11/5, 11/5, 11/2, to reach the semi-finals. Second seed Margot Prow also reached the semi-finals in three straight games beating Anya Stojanovic 11/4, 11/7, 11/4. In her semi-final, [1] Katie Malliff defeated 5/8 seed Lydia Robinson (Yorks) in straight games to reach her second final at the Championships following her victory in the under 13 category in 2015. Second seed Margot Prow (Mdx) faced 3/4 seed Layna Beattie (Wales), a repeat of the 2014 under 13 final in which Beattie came out on top. It wasn’t to be for Beattie this year with Prow winning 3-0 in a closely fought match to reach her second final at the championships.

In the boys under 15 quarter finals there was only one upset with 5/8 seed Alfie Lawes defeating the second seed Louie Martin 3-1. [3/4] Max Forster progressed through his match relatively comfortably with a 3-0 victory over Josh Perkins and [3/4] Adam Goad progressed through in four after dropping the first game. However, it wasn’t plain sailing for the number one seed Sam Todd with Panos Liatis saving three match balls to take the match into a decider. However, Todd came out on top with a 3-2 victory; 8/11, 11/9, 13/11, 10/12, 11/7 to see him progress into the semi-finals. In the semi-finals Adam Goad defeated 5/8 seed Alfie Lawes (Hants) 3-1 to reach his first final. Lawes made a comeback in the third taking it 11/6 to take the game into a fourth however Goad came out on top. The number one seed Sam Todd faced Max Forster (Northumb) in his semi-final as he attempted to reach his fourth successive final at the British Junior Championships. After dropping the first game Todd looked set to do so, winning the second and third game to take a 2-1 lead. In the fourth, Todd had two match balls only to see them saved and Forster proceed to win the game 14/12 and take the match into a decider. The fifth game was level pegged throughout, however Forster had the edge taking the game 11/9 to win the match 3-2 in an exciting encounter.

In the quarter finals of the girls under 13 category, the top four seeds all progressed through to the semi-finals. Top seed Torrie Malik beat Aliza Sheikh in straight games, however had to save game ball in the second to do so. Asia Harris also won 3-0 in a close match against fellow Pontefract club mate Amy Royle. Emma Bartley reached the semi-finals with relative ease, defeating Olivia Besant 11/5, 11/3, 11/2. 3/4 seed Saran Nghaim was taken to four games by Amelie Haworth after being pegged back at 2-0 however took the fourth game to line up a semi-final encounter with Emma Bartley. The semi-finals saw second seed Emma Bartley face [3/4] Saran Nghaim, the closely fought match saw Bartley progress to her first final at the championships with a 3-0 victory. The second semi-final saw number one seed Torrie Malik attempting to overcome [3/4] Asia Harris to reach a second final at the Championships. Malik took a 2-0 lead, however Harris claimed the third 11/6 to force the match into a fourth game. Harris had a game ball at 10/9 in the fourth, however Malik prevented the decider taking the game 12/10 to win the match 3-1.

The quarter finals of the boys under 13 event went according to seed bar one upset which saw the 3/4 seed Joel Braddock (Essex) defeated by 5/8 seed Jonah Bryant (Sussex) in straight games. Number one seed Sam-Osborne Wylde progressed to the semis relatively untroubled winning 11/5, 11/3, 11/2 over Welshman Rhys Evans. The second seed Ben Beachill also reached the semi-finals with a 3-0 victory over Scotsman Huzaifah Ali. The last quarter final saw 3/4 seed Finnlay Withington come from behind to defeat 5/8 seed Daniel Lewis (Wales) 3-1. The semi-finals saw top seed Sam Osborne-Wylde (Worcs) face 3/4 seed Finnlay Withington (Lancs). Osborne-Wylde won the match in three straight games to make the BU13 final for the second year in a row. 5/8 seed Jonah Bryant played above his seeding to defeat 2nd seed Ben Beachill (Yorks) to make his first final. Beachill made a comeback in the third to take the match into a fourth game however Bryant came out on top winning 3-1.

For draws and results visit www.englandsquash.com/bjc 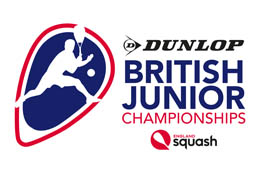