Find out where you stack up against your friends in your age group, in your county and across the country!

Since the launch of the new England Squash rankings, powered by Squash Levels, we have been listening to feedback from the squash community and are introducing some changes to further improve the rankings system, particularly for junior players. These changes will take effect on 1 November 2022.

We are also developing a new points-based ranking system for England Squash sanctioned junior competitions and are looking to launch an initial phase later in November. Keep an eye on our communication channels for more details, which will be shared in the coming weeks ahead of the launch.

Why are we making these changes?

We have carefully considered all the feedback we have received over the last few weeks and believe that these changes address some of the main themes identified, particularly in relation to which matches impact the rankings for junior players.

By removing friendly matches and reducing the weighting of box matches concerns around people being able to ‘work the system’ to their own benefit are addressed and the pressure is taken off junior players who wish to play friendly matches or box leagues for fun only, without their ranking being impacted. By increasing the number of sanctioned competitions need to play to be ranked, we hope junior players will be encouraged to participate in sanctioned competitions.

Please be aware that we will only accept and amend ranking errors which are submitted via the online rankings query form below.

Submission of errors made within 48 hours of the rankings update will be dealt with as soon as possible. Please note that errors submitted outside of the 48 hour window may experience a delay in being corrected in the ranking list.

Before submitting your enquiry please take the time to review our updated Rankings Policy and our Sanctioned Event Rules & Regulations 2022/23 as several policies have been amended since the last update.

England Squash teams up with SquashLevels

The previous Club Locker rankings were tournament based where a player would accumulate points based on their final position in each sanctioned event and the number of tournaments entered. Tournaments were weighted so you would get more points for the higher ranked events and the overall rankings would be based on your best four tournaments over the previous 12 months.

Levels is a simpler concept as it just measures your current playing level based on your results and the level of your opponents. If you play better than expected you will go up, if worse then expected you go down. It's a version of the Matrix system but is much more accurate as it takes points and behavioural modeling into account.

Get added to the rankings

Can't find your name? With our new exciting partnership with SquashLevels as long as you have played at least one England Squash sanctioned competition in the last twelve months you should automatically in the rankings. If you feel you are not please report it via the rankings queries form.

How the rankings system works

In order to appear in the junior rankings, you must have been within the age group at the time (note, for instance, that U15s will be included in the U17s and U19s rankings) and have played at least one sanctioned event in the previous 12 months.

Find out more about how junior rankings work here.

Ready for action? Click here to find your nearest competition! 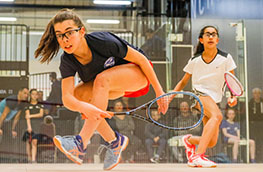