Master the basics of squash

The rules for both squash and squash 57 are almost identical, and to put them simply, you hit a ball against a wall! It’s as easy as that.

Like all sports, the full rules are detailed and comprehensive, so we've summarised the basic rules of both sports below. Want to explore the rules in more detail? Click here.

Hear tactics for gaining an advantage over your opponent from National Coach David Campion:

Get to grips with the jargon

Here's a quick run through on some of the common terms used in squash and squash 57:

Serve – starting a rally by hitting the ball (underarm or overarm) against the front wall.

Let – if your swing is impeded by your opponent, a let is called and neither player wins a point.

Stroke – if your swing is prevented by your opponent, a stroke is called and you win the point.

Service line – the line on the front wall in between the tin and out lines.

Tin – area below the lowest red line on the front wall. If the ball hits this line or below then it's out.

The T - the T shape in the middle of the court where the lines meet.

From rackets to balls, discover what equipment you need to hit the court. 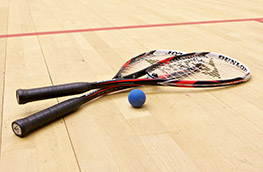