Matthew, who retired from professional squash in 2018, is one of the most successful English squash players of all time, with three Commonwealth Gold medals, three World titles, three British Open titles and 10 National titles to his name.

As Assistant Coach, Matthew will work alongside National Coach David Campion, bringing his unique elite-level experience in the sport to help Team England’s players prepare for and achieve success at the Games.

Since 2018, Matthew has been working with England Squash as a high performance coaching consultant and already plays a key role in nurturing and developing a number of England stars at the England Squash performance hub at Hallamshire Tennis & Squash Club in Sheffield.

“Along with the World Championships, the Commonwealth Games is the pinnacle of our sport and being involved in events like this is exactly why I got into coaching.

“Despite it being relatively early in my coaching career, I am learning every day and have enjoyed being part of England Squash’s build-up and preparation up to this point. The Commonwealth Games is a unique experience, particularly in doubles and I hope my experience of previous Games can help our players achieve their individual and collective goals.

“It’s a real honour to be part of Team England in what will be an extra special occasion with it being a home Games.”

National Coach David Campion said: “We are delighted to have Nick on board to assist the England team at the forthcoming Commonwealth Games.

"Nick brings a wealth of experience as a multiple gold medallist and his unique insight, particularly in doubles, is one of the reasons why he has been appointed. His level of professionalism and attention to detail adds a lot to the environment.

“We have been preparing for doubles in Manchester for quite some time now and Nick has been involved in those preparations throughout. It’s a home Games and we are fully aware that this represents an opportunity to showcase our wonderful sport to a wider audience.”

England Squash CEO Mark Williams said: “We are delighted that Nick has joined our coaching team for Birmingham 2022 and I’m sure he will have a significant impact on the team and the players before and during the Games.

“The Commonwealth Games presents a fantastic opportunity to shine a light on our sport, and the experience and attention to detail that Nick will bring will give our chances of medal success a real boost.” 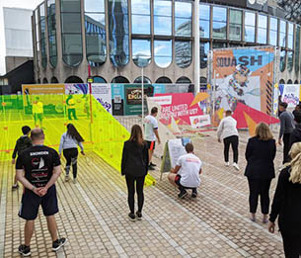